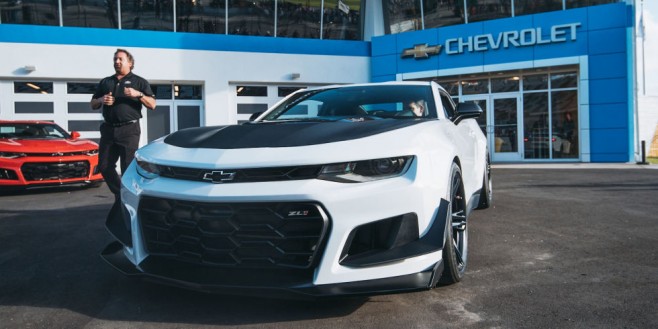 Woah, the Camaro ZL1 1LE has made a surprise debut today at Daytona International Speedway, just before this weekend’s running of the Daytona 500!

The most obvious visual change between this and a standard ZL1 is the addition downforce-generating aerodynamic devices–there’s a giant rear wing, and big dive planes at the front. There’s also a new, larger front splitter and a larger grille opening to feed air into the engine.

The ZL1 1LE also gets new 19-inch forged alloy wheels wrapped in ultra-wide Goodyear Eagle F1 Supercar tires–305s at the front and 325s at the rear.

All in all, these changes add up to a car that’s three seconds faster around GM’s proving ground than a standard ZL1.